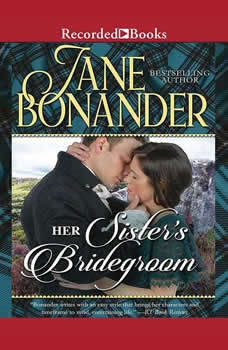 Bestselling author Jane Bonander pens an entertaining standalone tale of mistaken identity in this sexy Scottish historical. When Robbie Fleming is evicted from her Edinburgh rooming house, she fears she'll have to live on the street. Penniless, orphaned, and on poor terms with her only relative-her fraternal twin sister, Birdie-Robbie has nobody to turn to. But then she receives a letter from Gavin Eliot, the man she has pined for since she was a girl. Although Gavin (and every other male within miles) seemed head over heels in love with flirty and vivacious Birdie, his letter holds a surprise: He wants to marry Robbie. Thrilled by the proposal and her change of luck, Robbie accepts, landing on his doorstep with little more than the clothes on her back. Bookish Gavin always has his head in the clouds. When Robbie shows up at his borderlands manor, he's astonished-he realizes he's unwittingly proposed to the wrong sister. But with Robbie in need of a home and Gavin in need of a wife, they come to an understanding. Will Robbie's heart heal from the betrayal? And will Gavin learn to love the last woman he ever expected?