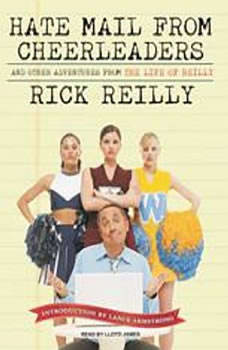 Hate Mail from Cheerleaders: And Other Adventures from the Life of Reilly

Each week, when Sports Illustrated's 21 million readers open up their magazine, many turn right to the last page because that's where to find SI's most popular feature: the Life of Reilly column written by bestselling author Rick Reilly. A twenty-one-year veteran of the magazine and ten-time Sportswriter of the Year, Reilly took over SI's back page in 1998, and his column immediately attracted a devoted audience who helped make his 1990 book, The Life of Reilly, a New York Times bestseller. This new collection includes 100 of Reilly's favorite columns from the last six years, along with an introduction by Lance Armstrong. The title of the book signifies the strong reader response his columns typically generate (he wrote a column saying that cheerleading isn't a sport, and there was a light-hearted backlash). Alternately side-splitting and heart-warming, but always opinionated and provocative, this book brings together the best work by the best columnist in the business.

This is pretty good. The constant Postscript at the end of each story is a little annoying at first, but then you kind of forget about it because the stories are so good. I am not a sports fan, but I enjoyed this book. I am considering subscribing to SI just to read his column.