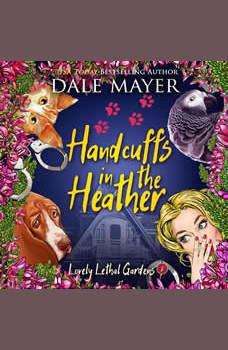 Riches to rags. ... Everything is under control, ... until it isn’t. And Doreen’s in the middle of it!

The four boxes of files Doreen inherited from journalist Bridgeman Solomon have already helped her solve one crime, and Doreen hopes they’ll continue to assist her as she sticks her nose into future cases. But, when she stumbles over a pair of pink satin handcuffs in her standoffish neighbor Richard de Genaro’s heather patch, it’s hard to believe that those reporter’s files could have anything useful to offer regarding that.

Doreen takes a look though, and soon she’s headed down a merry trail of prostitution, embezzlement, and, of course, murder. But the minute the files suggest a connection to Doreen’s specialty, a cold case, her beau and partner in crime, Corporal Mack Moreau, starts breathing down her neck.

With her trusty animals leading the way, Doreen sets out to find the connection between the reputable banker who died in an unsolved hit-and-run and the prostitute who owned the pink satin handcuffs. As Doreen puts it all together, even she is surprised at the outcome of her latest investigation.