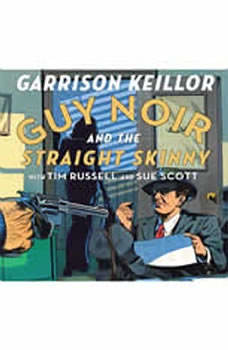 Guy Noir and the Straight Skinny

On the 12th floor of the Acme Building, on a cold February day in St. Paul, Guy Noir looks down the barrel of a loaded revolver in the hands of geezer gangster Joey Roast Beef who is demanding to hear what lucrative scheme Guy is cooking up with stripper-turned-women’s-studies-professor Naomi Fallopian. Everyone wants to know-Joey, Lieutenant McCafferty, reporter Gene Williker, Guy’s ex-girlfriend Sugar O’Toole, the despicable Larry B. Larry, the dreamboat Scarlett Anderson, Mr. Kress of the FDA-and Guy faces them one by one, as he and Naomi pursue a dream of earning gazillions by selling a surefire method of dramatic weight loss. In this whirlwind caper Guy looks death in the eye, falls in love, and faces off with the capo del capo del grande primo capo Johnny Banana.