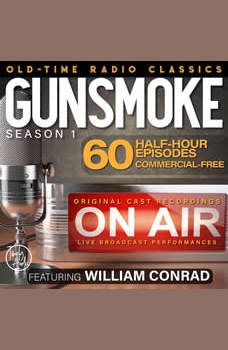 Set in Dodge City, Kansas, during the thriving cattle days of the 1870s, the Gunsmoke radio show was routinely called by radio drama enthusiasts “the best show of any kind and any time”. For nine years from 1952 to 1961, Gunsmoke dominated the airwaves as it portrayed the epic legend of the American West. The lead character of Marshall Matt Dillon, as played by William Conrad, was called the “Philip Marlowe of the old west”. Besides Conrad, the superb supporting cast included Parley Baer as Chester, Howard McNear as Doc Adams, and Georgia Ellis as Miss Kitty. After ending its nine-year run on radio, Gunsmoke made the transition to television where it ran for 20 years. (P)2020 Timely Audio from Public Domain recordings. Gunsmoke is a registered trademark of CBS Broadcasting, Inc.