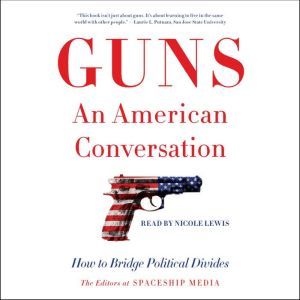 Guns, an American Conversation: How to Bridge Political Divides

Author: The Editors at Spaceship Media

Based on an article by Pulitzer Prize–winning reporters, the fascinating results of an important nationwide conversation about guns: Can complete strangers representing every point along the political divide engage in civil and productive discourse on the topic of gun control?As Americans, we spend a lot of time talking about guns. We have arguments, protests, declarations, and slogans about what kind of weapons can be sold and to whom. But the one thing we rarely have when it comes to firearms is a real conversation, and not just with members of our own tribe, but with people whose ideas don’t align with ours. That is perhaps why the country is so divided when it comes to reducing gun violence. Guns, an American Conversation follows up on a handful of strangers—teachers and gun-rights advocates, hunters and police officers, mothers and fathers across the United States—brought together in a larger group of 150 people, for a month-long moderated Facebook group chat. The goal of the project—which expanded on earlier efforts—was to foster a civil, yet honest, dialogue between people whose backgrounds and beliefs led them to have opposing views on the issue. Not just a journalistic account, Guns attempts to map out common territory in a nation driven by profound divides. It includes sidebars, charts, and graphics that list additional information about gun control in the United States and provide the reader with tools to continue the discussion in their own lives. This book might not change your mind about gun control, but it will help you learn to cross divides in conversation.