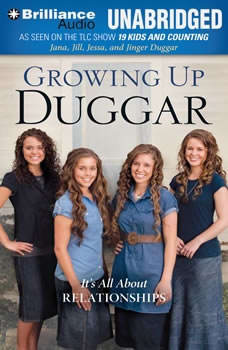 Growing Up Duggar: It's All About Relationships

In a rare look inside America’s favorite mega-sized family, the four eldest girls talk about their faith, their dreams for the future, and what it’s like growing up a Duggar.Airing weekly throughout the United States, the United Kingdom, Australia, and New Zealand, 19 Kids and Counting has made the huge Duggar family into a media phenomenon. The Duggar children are frequently asked, “Tell the truth; do you really agree with the lifestyle your parents have created for you?” Now, the four eldest Duggar girls—Jana, Jill, Jessa, and Jinger—open up about the blessings and advantages of living the Duggar lifestyle.With a backdrop of the key relationships in their lives—relationship with self, parents, siblings, friends, boys, and God—the four Duggar girls open up about their own personal faith and convictions, boys, dating, manners, living in a large family, politics, and much more. You’ll learn how the family navigates the difficult years between twelve and sixteen and what the girls look for in a man, all in a frank and fun audiobook that will inspire teens and adults alike. Including lighthearted stories about the younger kids’ antics, Growing Up Duggar is a wise and entertaining trip into a family like no other.