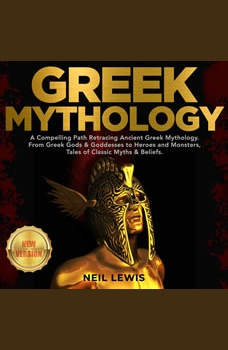 Retrace the ancient stories and legends of one of history’s most famous civilizations.

The ancient Greeks left behind a vast and rich Mythology, imbued with stories of world-changing wars, monsters and heroes, and legends of imposing Gods and Goddesses ruling from their kingdom atop Mount Olympus. Now, this audiobook peers behind the curtain of the Greek Myths, unveiling these incredible legends like never before.

From the epic tales of Homer to the feats of bravery and courage from beloved heroes like Heracles, Perseus and Jason, you’ll discover the bloodshed and battle of the Trojan war, the ancient Greek’s chaotic origin story for the universe, the world-changing war against the Titans, and Zeus’s rise to power atop mount Olympus.

Meet the bickering Gods and Goddesses as they bestowed favors upon heroes and punished the wicked, playing tricks on each other and reflecting the chaotic and mortal nature of the humans who imagined them. Let this guide take you to the depths of the Minotaur’s labyrinth and to the far-flung land of the Golden Fleece, watching as mighty warriors made a place for themselves behind the gates of Olympus with their daring and cunning feats.

From the heavens of Zeus to the pits of Hades and the seas of Poseidon, inside this classic collection of Greek Myths you’ll discover the epic stories that have inspired thousands of artists and storytellers throughout the ages, forming perhaps the most beloved and well-told myths in all of human history.

Buy now to uncover Greek Mythology like never before.
Recommended