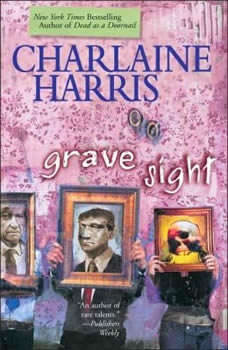 Charlaine Harris writes best-selling mysteries described by Booklist as “gripping and spicy,” and praised by the Denver Post for their “goofy charm.” Grave Sight draws listeners into the intriguing world of Harper Connelly, a woman with a unique gift: she can “see” the dead and how they died. A teenage girl missing from a small Ozarks town is feared dead. Hired by local police, Harper locates the girl’s body in a nearby forest. But there’s more than one corpse in those woods, and the second one raises questions no one wants to ask. Soon Harper and her assistant, her stepbrother Tolliver, are under suspicion. All they want is to get out of town, but they will have to clear their reputations first. The pun in the title is only the first dose of a potion that is sure to put every listener under Grave Sight’s spell.

I got this book because I enjoy the supernatural/mystery/humor of Charlaine Harris' 'Sookie' series but was quite disappointed in it. The main character is female and has supernatural abilities like Sookie, but is whiny, weak, and way too focused on earning money. And the plot is very serious and becomes predictable. So although I finished reading this novel, I won't read anymore of this series.

It was an easy read. I'll continue on with the series.

In this series by Charlaine Harris we have another female lead, this time Harper has had a tramatic event in her past that has given her a gift to find the dead. I had some trouble liking Harper because she tends to be weak and very dependent on her brother but as the book went on the charecter grew and I liked her better. She has a VERY close relationship with her step-brother that some find a little unsettling, but I had no problem with it myself. Harper is hired to find a missing teenager, in doing so she finds out that he was murdered along with his girlfriend. Harper finds herself having to solve the murder and getting drawn into the lives of the townspeople. Even though I pretty much had figured out who done it before the end I was interested enough in the story to finish and see how the secondary story line played into the main story line. I will finish the series because I like Charlaine Harris stories, and I want to see if Harper becomes a stronger person.