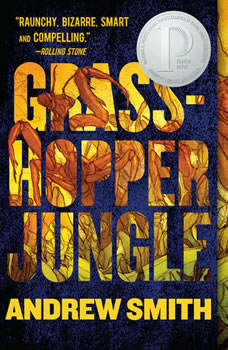 This is the truth. This is history.
It’s the end of the world. And nobody knows anything about it.
You know what I mean.

Funny, intense, complex, and brave, Grasshopper Jungle brilliantly weaves together everything from testicle-dissolving genetically modified corn to the struggles of recession-era, small-town America in this groundbreaking coming-of-age stunner.

“Andrew Smith is the bravest storyteller I know. Grasshopper Jungle is the most intelligent and gripping book I’ve read in over a decade. I didn’t move for two days until I had it finished. Trust me. Pick it up right now. It’s a masterpiece.” – A. S. King, Printz Honor-winning author of Ask the Passengers and Please Ignore Vera Dietz

“Grasshopper Jungle is about the end of the world. And everything in between.” – Alex London, author of Proxy

“In Grasshopper Jungle, it’s as if Andrew Smith is somehow possessed by the ghost of Kurt Vonnegut. This book is nothing short of a brilliant, hilarious thrill-ride that is instantly infectious. But, the most beautiful thing about Grasshopper Jungle has nothing to do with the absurd or out-of-this-world. It is the deft hand by which Smith explores teenage love and sexuality that is truly breathtaking. In writing a history of the end of the world, Smith may have just made history himself.” – John Corey Whaley, Printz Award-winning author of Where Things Come Back

The New York Times–bestselling Razorland saga from Ann Aguirre continues.Since the war ended, Tegan has dreamed of an epic journey, so when she has the opportunity to sign on as ship's doctor, she can't wait. It's past time to chart her course...

Twenty years ago a man made a child he never intended to love. Ten years ago the world ended, and Emma turned her back on the man she believed was her father in an attempt to survive. Eight weeks ago she discovered the truth about her family, includ...