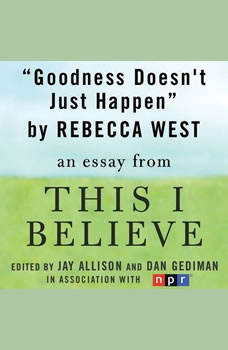 Goodness Doesn't Just Happen: A "This I Believe" Essay

Critic, journalist, novelist, and feminist Rebecca West describes her discovery that human nature does not naturally support liberty in "Goodness Doesn’t Just Happen", her contribution to NPR’s This I Believe series.

Featuring a star-studded list of contributors that includes John McCain, Isabel Allende, and Colin Powell, as well as pieces from the original 1950's series including Helen Keller and Jackie Robinson, the This I Believe collection also contains essays by a Brooklyn lawyer, a woman who sells yellow pages advertising in Fort Worth, TX and a man who serves on the state of Rhode Island's parole board. The result is a stirring, funny and always provocative trip inside the minds and hearts of a diverse group of Americans whose beliefs, and the incredibly varied ways in which they choose to express them, reveal the American spirit at its best.

Goodness Doesn't Just Happen: A "Th...
This I Believe