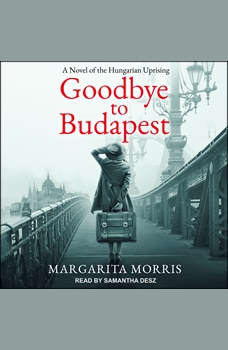 Goodbye to Budapest: A Novel of the Hungarian Uprising

Family and freedom. It's worth fighting for what really matters. Budapest, 1952. When Katalin and her father, Márton, are woken by the ringing of the doorbell in the dead of night, it can mean only one thing. The Secret Police have come to arrest him on charges of subversion. But Katalin knows her father is innocent. In a communist society where ordinary people live in fear of the dreaded Secret Police, suspicion and betrayal are rife. Whilst Márton endures the injustice of being wrongly accused, Katalin must find out who among her friends and acquaintances she can truly trust. But there is a glimmer of hope in the darkness. The death of Stalin is a spark that ignites a fuse. For the first time it seems that change is possible. In October 1956, a student-led demonstration soon turns into a bloody battle to overthrow the hated communist regime. Confronted by Soviet tanks, young and old take to the streets, armed with Molotov cocktails, bravery, and cunning. Katalin and those she loves must fight for freedom. They must fight to survive. Packed with authentic historical details, Goodbye to Budapest is a panoramic novel of courage, sacrifice and the indomitable human quest for freedom.