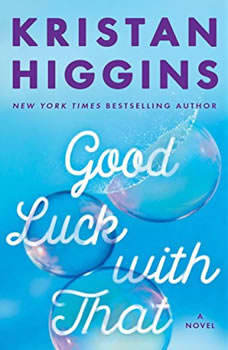 Good Luck with That

New York Times bestselling author Kristan Higgins is beloved for her heartfelt novels filled with humor and wisdom. Now, in her newest novel, GOOD LUCK WITH THAT, she tackles an issue every woman deals with: body image and self-acceptance. Emerson, Georgia, and Marley have been best friends ever since they met at a weight-loss camp as teens. When Emerson tragically passes away, she leaves one final wish for her best friends: to conquer the fears they still carry as adults. For each of them, that means something different. For Marley, it's coming to terms with the survivor's guilt she's carried around since her twin sister's death, which has left her blind to the real chance for romance in her life. For Georgia, it's about learning to stop trying to live up to her mother's and brother's ridiculous standards, and learning to accept the love her ex-husband has tried to give her. But as Marley and Georgia grow stronger, the real meaning of Emerson's dying wish becomes truly clear: more than anything, she wanted her friends to love themselves. A novel of compassion and insight, GOOD LUCK WITH THAT tells the story of two women who learn to embrace themselves just the way they are. Narrators: Xe Sands, Lori Gardner, Suzy Jackson

The Girls of Mischief Bay
by Susan Mallery

New York Times bestselling author Susan Mallery is world renowned for her "insightful, funny, and poignant" stories (Booklist). With her brand-new Mischief Bay series, Susan brings to vivid color the story of three friends on the brink of a new life...

From the bestselling author of The Girls of Mischief Bay and The Friends We Keep comes a twisty tale of family dynamics that explores what can go terribly, hysterically wrong when the line between friendship and family blurs… Zoe Saldivar ...