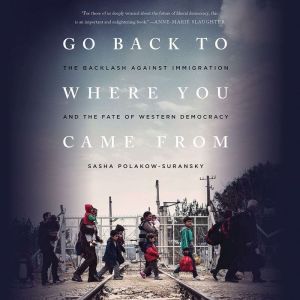 Go Back to Where You Came From: The Backlash Against Immigration and the Fate of Western Democracy

What if politicians pose a graver threat to liberal democracy than mass migration?Brexit and Donald Trump's victory were just the beginning--and Marine Le Pen's defeat does not signal a turning of the tide. --From the IntroductionFrom Europe to the United States, opportunistic politicians have exploited the economic crisis, terrorist attacks, and an unprecedented influx of refugees to bring hateful and reactionary views from the margins of political discourse into the mainstream. They have won the votes of workers, women, gays, and Jews; turned openly xenophobic ideas into state policy; and pulled besieged centrist parties to the right. How did we get here?In this deeply reported account, Sasha Polakow-Suransky provides a front-row seat to the anger, desperation, and dissent that are driving some voters into the arms of the far right and stirring others to resist. He introduces readers to refugees in the Calais "Jungle" and the angry working-class neighbors who want them out; a World War II refugee-turned-rabbi who became a leading defender of Muslim immigrants; the children of Holocaust survivors who have become apologists for the new right; and alt-right activists and the intellectuals who enable them.Polakow-Suransky chronicles how the backlash against refugees and immigrants has reshaped our political landscape. Ultimately, he argues that the greatest threat comes not from outside, but from within--even established democracies are at risk of betraying their core values and falling apart.