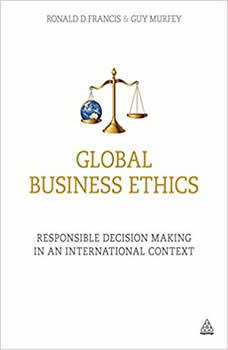 Corporate social responsibility, sustainability and acting ethically are all accepted business aims, but their meaning and implementation in a global context is far less clear-cut. Global Business Ethics cuts through the confusion to provide a coherent basis for ethical decision-making within the complications of the international business landscape. Underpinned by theory and including worked-through examples of ethical dilemmas and their solutions, this textbook will guide the reader beyond theory to real-world business decisions. Practical tools such as decision trees and suggested principles to apply in dilemma situations give readers the skills and confidence to tackle the ethical challenges they face. Global Business Ethics offers a unique working code of ethics provided as a model with guidance to readers for adaptation and implementation. Case studies include: Walmart, Hershey's, Citibank, Ford, Nike, Johnson & Johnson, Harley-Davidson, The Body Shop and Procter and Gamble.A chapter on the legal aspects of ethics provides guidance on the complex relationship between law and ethics in international business. The final part takes an in-depth look at the practical application of ethics in business life. Covering all the major theories of ethics, including an examination of the role of quantification of ethics, Global Business Ethics demonstrates how their principles can be applied to inform better business decisions.