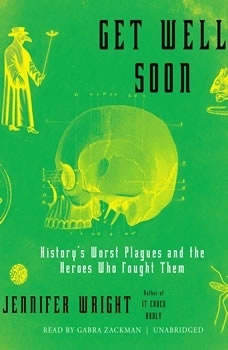 Get Well Soon: Historys Worst Plagues and the Heroes Who Fought Them

A witty, irreverent tour of history's worst plagues-from the Antonine Plague, to leprosy, to polio-and a celebration of the heroes who fought themIn 1518, in a small town in Alsace, Frau Troffea began dancing and didn't stop. She danced until she was carried away six days later, and soon thirty-four more villagers joined her. Then more. In a month more than 400 people had been stricken by the mysterious dancing plague. In late-nineteenth-century England an eccentric gentleman founded the No Nose Club in his gracious townhome-a social club for those who had lost their noses, and other body parts, to the plague of syphilis for which there was then no cure. And in turn-of-the-century New York, an Irish cook caused two lethal outbreaks of typhoid fever, a case that transformed her into the notorious Typhoid Mary.Throughout time, humans have been terrified and fascinated by the diseases history and circumstance have dropped on them. Some of their responses to those outbreaks are almost too strange to believe in hindsight. Get Well Soon delivers the gruesome, morbid details of some of the worst plagues we've suffered as a species, as well as stories of the heroic figures who selflessly fought to ease the suffering of their fellow man. With her signature mix of in-depth research and storytelling, and not a little dark humor, Jennifer Wright explores history's most gripping and deadly outbreaks, and ultimately looks at the surprising ways they've shaped history and humanity for almost as long as anyone can remember. An Audible.com Best of the Year for 2017 in History. A Nylon Magazine Pick of Books We Can't Wait to Read. Finalist for the Library Journal Best Audiobook Listen List.