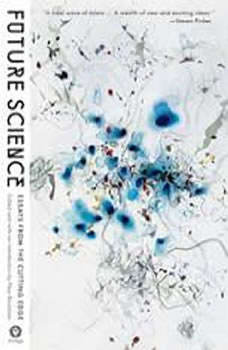 In this fascinating collection of writings that introduce the very latest theories and discoveries in science, editor Max Brockman presents the work of some of today’s brightest and most innovative young researchers.

Future Science features eighteen young scientists, most of whom are presenting their work and ideas to a general audience for the first time. Included in this collection are

* William McEwan, a virologist, discussing his research into the biology of antiviral immunity

* Jon Kleinberg, a computer scientist, showing what massive datasets can teach us about society and ourselves

* Anthony Aguirre, a physicist, who gives readers a tantalizing glimpse of infinity

“Future Science shares with the world a delightful secret that we academics have been keeping—that despite all the hysteria about how electronic media are dumbing down the next generation, a tidal wave of talent has been flooding into science, making their elders feel like the dumb ones. . . . It has a wealth of new and exciting ideas, and will help shake up our notions regarding the age, sex, color, and topic clichés of the current public perception of science.”
—Steven Pinker, author of The Stuff of Thought