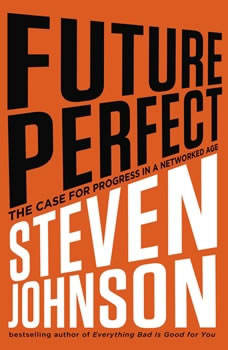 Future Perfect: The Case For Progress In A Networked Age

Combining the deft social analysis of Where Good Ideas Come From with the optimistic arguments of Everything Bad Is Good For You, New York Times bestselling author Steven Johnson’s Future Perfect makes the case that a new model of political change is on the rise, transforming everything from local governments to classrooms, from protest movements to health care. Johnson paints a compelling portrait of this new political worldview -- influenced by the success and interconnectedness of the Internet, but not dependent on high-tech solutions -- that breaks with the conventional categories of liberal or conservative thinking.

With his acclaimed gift for multi-disciplinary storytelling and big ideas, Johnson explores this new vision of progress through a series of fascinating narratives: from the “miracle on the Hudson” to the planning of the French railway system; from the battle against malnutrition in Vietnam to a mysterious outbreak of strange smells in downtown Manhattan; from underground music video artists to the invention of the Internet itself.

At a time when the conventional wisdom holds that the political system is hopelessly gridlocked with old ideas, Future Perfect makes the timely and inspiring case that progress is still possible, and that new solutions are on the rise. This is a hopeful, affirmative outlook for the future, from one of the most brilliant and inspiring visionaries of contemporary culture.

The End of Big
by Nicco Mele

Top of the Morning
by Brian Stelter

NEW YORK TIMES BESTSELLERCNN correspondent Brian Stelter reveals the dark side of morning television with exclusive material about current and past morning stars, from Matt Lauer to Katie CouricWhen America wakes up with personable and charming hos...

The Dumbest Generation
by Mark Bauerlein

In this pathbreaking work, now with a new introduction, Edward S. Herman and Noam Chomsky show that, contrary to the usual image of the news media as cantankerous, obstinate, and ubiquitous in their search for truth and defense of justice, in their ...

After the Fact
by Nathan Bomey

This trenchant analysis examines the many ways our society's increasingly tenuous commitment to facts laid the groundwork for Donald Trump's rise to power.Award-winning journalist Nathan Bomey argues that Trump did not usher the post-truth era into ...

Renowned media scholar Sherry Turkle investigates how a flight from conversation undermines our relationships, creativity, and productivity—and why reclaiming face-to-face conversation can help us regain lost ground.We live in a technological ...

The Internet of Us
by Michael P. Lynch

We used to say "seeing is believing"; now googling is believing. With 24/7 access to nearly all of the world's information at our fingertips, we no longer trek to the library or the encyclopedia shelf in search of answers. We just open our browsers,...

“One of the most mesmerizing and important books I’ve read in quite some time. Alter brilliantly illuminates the new obsessions that are controlling our lives and offers the tools we need to rescue our businesses, our families, and our s...