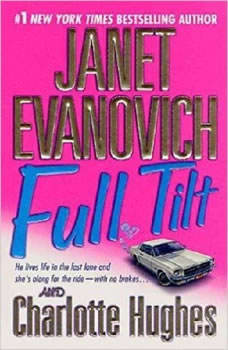 In Janet Evanovich and Charlotte Hughes's Full Tilt, he lives life in the fast lane and she's along for the ride-with no brakes....Beaumont, South Carolina, has mint julips, ladies who lunch, good ole boy politics, and Jamie Swift. She's running her family newspaper, ready to marry the town's most eligible bachelor, and getting her future locked in. Then mysterious, high-tech wonder boy Max Holt comes to town. Sexy, wise-cracking Max has turned from computers to crime-stopping. Now' he's got a case in Beaumont and a reason to look up Jamie Swift. He finds her impossible. She calls him infuriating. They're a perfect couple...except for her fiance and the arrival of two hitmen. Sure enough, someone wants to kill Max. Someone else wants a town bigwig rubbed out. And suddenly Jamie's caught in the crossfire of her own emotions, Max's secrets, and the most irresistible desire...