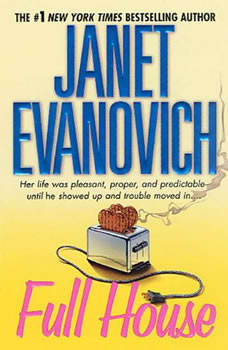 Filled with Evanovich's trademark style and wit, Full House is romantic suspense with a twist . . Polo instructor Nicholas Kaharcheck senses danger the minute he sees Billie Pearce. She represents everrything he's always avoided. Happy in her home life, a divorced mother of two, Billie is the epitome of stability. They have nothing in common.To his horror, Nick is fascinated - and irresistibly attracted. When Billie generously offers to share her home with Nick's crazy cousin Deedee for a while, Nick finds himself visiting - often. And while each is slowly seduced by the other's charms, and both are wildly encouraged by devious Deedee, Billie and Nick find out that what they have in common is most important of all. But neither one knows that danger is lurking where they least expect it, and a killer is closing in on them.

I did not finish. I was very disappointed. I really like motor mouth series, but this was just to slow.