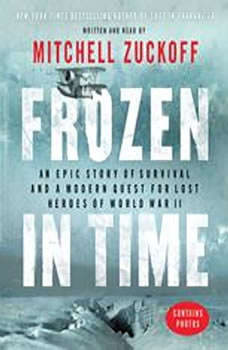 Frozen in Time: An Epic Story of Survival and a Modern Quest for Lost Heroes of World War II

On November 5, 1942, a U.S. cargo plane slammed into the Greenland ice cap. Four days later, a B-17 on the search-and-rescue mission also crashed. Miraculously, all nine men on the B-17 survived. The U.S. military launched a second daring rescue operation, but the Grumman Duck amphibious plane sent to find the men vanished.In this thrilling adventure, Mitchell Zuckoff offers a spellbinding account of these harrowing crashes and the fate of the survivors and their would-be saviors. Frozen in Time places us at the center of a group of valiant airmen fighting to stay alive through 148 days of a brutal Arctic winter until an expedition attempts to bring them to safety. But that is only part of the story. In present-day Greenland, Zuckoff joins the Coast Guard and North South Polar Inc. on a dangerous expedition to recover the remains of the lost plane's crew.Frozen in Time is a breathtaking blend of mystery, adventure, heroism, and survival. It is also a poignant reminder of the sacrifices of our military personnel and their families—and a tribute to the important, perilous, and often overlooked work of the U.S. Coast Guard.