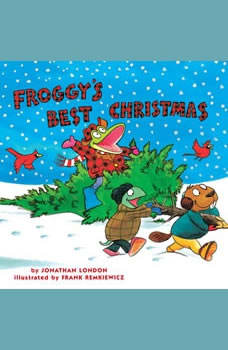 Froggy has never celebrated Christmas; usually he's taking his long winter's nap. But not this year! Froggy's best friend, Max the beaver, wakes him up to join the fun. Soon, Froggy's gotten into the swing of things: finding a tree, wrapping presents, singing carols, and enjoying a holiday feast. Join Froggy as he celebrates his very first, and very best, Christmas!

"The humor and spirited artwork will put Froggy fans in the holiday mood!" (The Horn Book)

"Children who have delighted in the earlier books about Froggy will cheer him along as he experiences his very first Christmas." (School Library Journal)

Froggy Gets Dressed
The Froggy series

Froggy Eats Out
The Froggy series