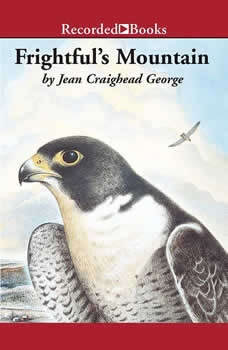 Series: My Side of the Mountain #3

Frightful, the peregrine falcon who first appeared in My Side of the Mountain, is back. Her amazing journey through life continues in the face of many rousing wildlife adventures. Will she survive the wilderness, even though she was raised by a human? When an old friend rescues her from captors, Frightful soars into the unfamiliar woodlands and searches for home. Before finding her mountain, she adopts a nest of motherless peregrine chicks. But construction crews, bird poachers, and even a bald eagle threaten her new family. Frightful needs help from Sam Gribley, the human who raised her. Kids and parents alike will be captivated by this action-packed continuation of Sam and Frightful's journey. Acclaimed author Jean Craighead George has won a Newbery Medal. With Jeff Woodman's splendid rendition, you feel the wind blow through your hair as Frightful glides above the hemlock trees.

Tristan Strong Punches A Hole In The Sky
by Kwame Mbalia

In a networked world, anything can change n an instant, and sometimes everything does.... Transmission, Hari Kunzru's new novel of love and lunacy, immigration and immunity, introduces a daydreaming Indian computer geek whose luxurious fantasies ab...

This is the unauthorized, uncensored and unbelievable true story behind the making of a pop culture phenomenon. The original Star Trek series debuted in 1966 and has spawned five TV series spin-offs and a dozen feature films, with an upcoming one fr...

Inspired by her blockbuster phenomenon Wonder, R. J. Palacio presents an unforgettable story of the power of kindness and unrelenting courage in a time of war. In R. J. Palacio's bestselling collection of stories Auggie & Me, which expands ...

The Swan Thieves
by Elizabeth Kostova

Psychiatrist Andrew Marlowe has a perfectly ordered life--solitary, perhaps, but full of devotion to his profession and the painting hobby he loves. This order is destroyed when renowned painter Robert Oliver attacks a canvas in the National Galler...

In a networked world, anything can change n an instant, and sometimes everything does.... Transmission, Hari Kunzru's new novel of love and lunacy, immigration and immunity, introduces a daydreaming Indian computer geek whose luxurious fantasies ab...

The Lifeboat
by Charlotte Rogan

Grace Winter, 22, is both a newlywed and a widow. She is also on trial for her life.In the summer of 1914, the elegant ocean liner carrying her and her husband Henry across the Atlantic suffers a mysterious explosion. Setting aside his own safety, ...

The Enormous Radio
by John Cheever

Here is one of twelve magnificent stories, originally part of The John Cheever Audio Collection, in which John Cheever celebrates -- with unequaled grace and tenderness -- the deepest feelings we have.As Cheever writes in his preface, "These storie...