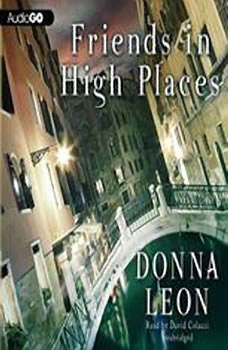 In Friends in High Places, Commissario Guido Brunetti is visited by a young bureaucrat investigating the lack of approval for the building of Brunetti's apartment years before. What began as a red tape headache ends in murder when the bureaucrat is later found dead after a mysterious fall from a scaffold. Brunetti starts an investigation that will take him into the unfamiliar and dangerous areas of drug abuse and loan-sharking, and will reveal, once again, what a difference it makes in Venice to have friends in high places. Winner of the CWA Silver Dagger in 2000.

By Its Cover
A Commissario Guido Brunetti Myster...