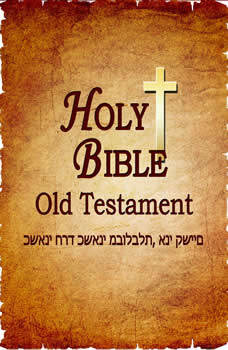 The Old Testament (abbreviated OT) is the first part of the Christian biblical canon, which is based primarily upon the twenty-four books of the Hebrew Bible (or Tanakh), a collection of ancient religious Hebrew writings by the Israelites[1] believed by most Christians and religious Jews to be the sacred Word of God. The second part of Christian Bibles is the New Testament, originally written in the Koine Greek language.

The books that compose the Old Testament canon, as well as their order and names, differ between Christian denominations. The Catholic canon comprises 46 books, the canons of the Eastern Orthodox and Oriental Orthodox Churches comprise up to 49 books[2], and the most common Protestant canon comprises 39 books. The 39 books in common to all the Christian canons correspond to the 24 books of the Tanakh, with some differences of order, and there are some differences in text. The additional number reflects the splitting of several texts (Kings, Samuel and Chronicles, Ezra–Nehemiah and the Twelve Minor Prophets) into separate books in Christian bibles.

The Old Testament consists of many distinct books by various authors produced over a period of centuries.[3] Christians traditionally divide the Old Testament into four sections: (1) the first five books or Pentateuch (Torah); (2) the history books telling the history of the Israelites, from their conquest of Canaan to their defeat and exile in Babylon; (3) the poetic and "Wisdom books" dealing, in various forms, with questions of good and evil in the world; and (4) the books of the biblical prophets, warning of the consequences of turning away from God.