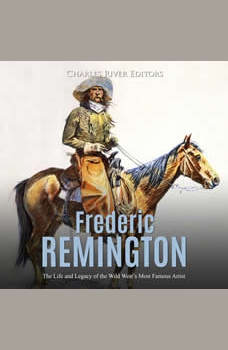 Frederic Remington: The Life and Legacy of the Wild West’s Most Famous Artist

Many of the first artists in the West were assigned to exploration and geological parties, working as archivists and obedient to demands of cold accuracy. However, a few were driven by an imaginative mix of real events and fantastical visions to whet the appetite of Eastern consumers and preserve their own nostalgia on canvas. Among the artists who developed a passionate relationship with the West to one degree or another, two remain iconic in the modern day. Charles Marion Russell, a Missourian drawn to the Montana country, expressed a general empathy for the Native American tribes and the American cowboy. New Yorker Frederic Remington held the advantage in education and talents as a draftsman, but he did not lose himself so entirely to the western American experience. His paintings, sculptures, short stories, and novels are often centered on the military and its wars against the resident tribes. Remington, somewhat more cynical than Russell, was nevertheless a master of depicting violent action in fantastical but credible situations where life hung in the balance. He, too, lamented that the land of his youth’s fascination “had nearly vanished, even though his direct experience with that land and culture was not in the long run successful.

Esteemed for his depiction of “swift action and precise accuracy of detail,” Remington’s creative accounts of the 19th century’s last few decades fired the imaginations of Americans thousands of miles away from the frontier.