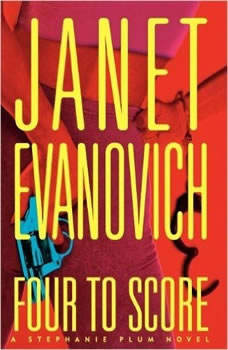 A Featured Alternate Selection of the Literary Guild and Doubleday Book Club and a Main Selection of the Mystery GuildJanet Evanovich, bestselling author of One for the Money, Two for the Dough, and Three to Get Deadly, scores big with Four to Score, her most thrilling Stephanie Plum adventure yet. Working for her bail bondsman cousin Vinnie, Stephanie is hot on the trail of revenge-seeking waitress Maxine Nowicki, whose crimes include bail jumping, theft, and extortion. Someone is terrifying Maxine's friends, and those who have seen her are turning up dead. Also on the hunt for Maxine is Joyce Barnhardt, Stephanie's archenemy and rival bounty hunter. Stephanie's attitude never wavers-- even when aided by crazy Grandma Mazur, ex-hooker and wannabe bounty hunter Lula, and transvestite rock musician Sally Sweet-- and even when Stephanie makes an enemy whose deadly tactics escalate from threatening messages to firebombs. All of this pales in comparison, though, with an even greater danger Stephanie faces, when, homeless and broke, she and her hamster Rex move in with a vice cop Joe Morelli. RATED PG35 for licentious wit and libidinous cohabitation.

I've listened to the several of the Stephanie Plum series, mostly the abridged ones. This is the first unabridged I've gotten. I was very disappointed by the unnecessary and frequency of the profanity, especially the f word. It seems like it's in almost every other sentence. I am not a prude, but neither do I enjoy profanity just for shock value. I had all of the rest of the series in my queue, but have deleted them all. It's a shame, since the story lines are creative and the character development enjoyable. I really felt like I'd gotten to know Stephanie, Lulu, Connie, Ranger and Morelli. Too bad I won't find out what happens in the future...

This was a great book. I am enjoying this series very much!