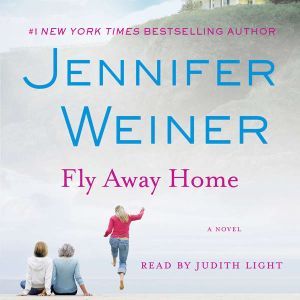 One of the nation’s most beloved writers, Jennifer Weiner has become a literary phenomenon with millions of copies of her books in print. Her latest work, Fly Away Home , is an unforgettable story of a mother and two daughters who seek refuge in an old Connecticut beach house. Sylvie has spent the last thirty-eight years being the ideal politician’s wife. After a painful public betrayal, she retreats to her grandmother’s rambling seaside home to ride out the scandal and find herself again.Sylvie’s eldest daughter, Kate, married out of friendship and respect, not love...then years later, finds herself falling for a most unsuitable man. When the affair ends badly, she sets off in search of a new beginning.Lizzie, Sylvie’s youngest, who caused her parents such heartache as a teenager, is finally getting her life together. When a summer fling leaves her pregnant, and her charming boyfriend turns violent, Lizzie heads out of town.Fly Away Home is about a family of women who, together, find their voices, their purpose, and the power they’ve had all along. With Weiner’s signature blend of heartbreak and humor, this stunning follow-up to one of the most popular novels of the year will resonate with listeners everywhere.

Formulaic and predicable...somehow summer reading does not translate well to audio, in my opinion.