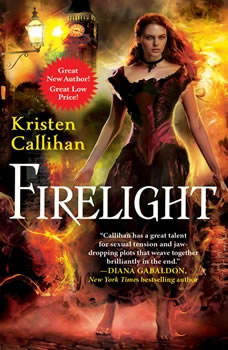 London, 1881Once the flames are ignited . . . Miranda Ellis is a woman tormented. Plagued since birth by a strange and powerful gift, she has spent her entire life struggling to control her exceptional abilities. Yet one innocent but irreversible mistake has left her family's fortune decimated and forced her to wed London's most nefarious nobleman.They will burn for eternity . . . Lord Benjamin Archer is no ordinary man. Doomed to hide his disfigured face behind masks, Archer knows it's selfish to take Miranda as his bride. Yet he can't help being drawn to the flame-haired beauty whose touch sparks a passion he hasn't felt in a lifetime. When Archer is accused of a series of gruesome murders, he gives in to the beastly nature he has fought so hard to hide from the world. But the curse that haunts him cannot be denied. Now, to save his soul, Miranda will enter a world of dark magic and darker intrigue. For only she can see the man hiding behind the mask.

Once blissfully in love . . . Poppy Lane is keeping secrets. Her powerful gift has earned her membership in the Society for the Suppression of Supernaturals, but she must keep both her ability and her alliance with the Society from her husband, Win...

A Rogue By Any Other Name
by Sarah MacLean

New York Times bestselling author Sarah MacLean has taken the world of historical romance fiction by storm! With A Rogue by Any Other Name, she once again boldly breaks new ground.The first book in her remarkably fresh and original Fallen Angels se...

One Good Earl Deserves a Lover
by Sarah MacLean

Lady Philippa Marbury is . . . oddThe brilliant, bespectacled daughter of a double marquess cares more for books than balls, for science than the season, and for laboratories than love. She's looking forward to marrying her simple fiancé a...