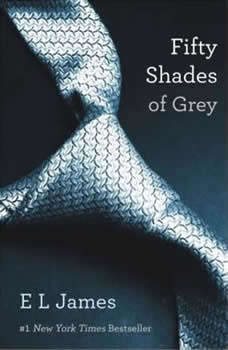 THE WORLDWIDE BESTSELLER FEATURED IN THE MOVIE "Book Club"

When literature student Anastasia Steele goes to interview young entrepreneur Christian Grey, she encounters a man who is beautiful, brilliant, and intimidating. The unworldly, innocent Ana is startled to realize she wants this man and, despite his enigmatic reserve, finds she is desperate to get close to him. Unable to resist Ana’s quiet beauty, wit, and independent spirit, Grey admits he wants her, too—but on his own terms.

I absolutely love the book...........and the others as well. Have not been this much into reading since forever ago. Thank you EL James - And thank (f) to my Christian. I'm passed obsessed.

I struggled through this book. I didnt like the one of the main characters, Christian Gray. I thought he had no redeeming qualities. I was going to quit the series. But a friend of mine talked me into reading the second book. In this book, Christian does a 180 turn around. You learn what made him the way he is and he turns into a much more sympathetic character. I really enjoyed the second book. I cant wait for the third book. If you start these books, get through the first book. The second book brings so much more to light and makes the books have a purpose and brings understanding. I feel sure if you read the first two, youll be looking forward to the third.

Could not put the book down. It was great fun!