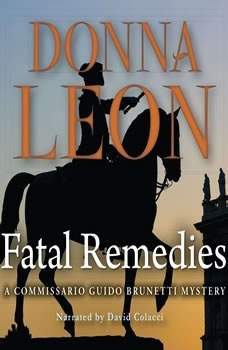 In Fatal Remedies, Brunetti's career is under threat when his professional and personal lives unexpectedly intersect. In the chill of the Venetian dawn, a sudden act of vandalism shatters the quiet of the deserted city, and Brunetti is shocked to find that the culprit waiting to be apprehended at the scene is a member of his own family. Meanwhile, he is also under pressure from his superiors to solve a daring robbery with connections to a suspicious accidental death. Could the two crimes be connected? And will Brunetti be able to prove his family's innocence before it's too late?