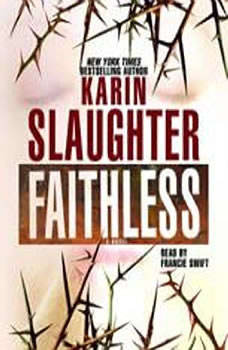 “Brilliant plotting, relentless suspense,” raved the Washington Post. “A new synonym for terror,” crowned the Detroit Free Press. The critics agree: no one writes suspense like Karin Slaughter, whose thrillers featuring medical examiner Sara Linton and her ex-husband, police chief Jeffrey Tolliver, have propelled her to the top of bestseller lists the world over. Now Slaughter fuses her unmatched grasp of forensic science and a mastery of complex relationships in a riveting tale of faith, doubt, and murder.

The victim was buried alive in the Georgia woods—then killed in a horrifying fashion. When Sara Linton and Jeffrey Tolliver stumble upon the body, both become consumed with finding out who killed the pretty, impeccably dressed young woman. And for Sara and Jeffrey, a harrowing journey begins, one that will test their own turbulent relationship and draw dozens of lives into the case.

Lena Adams is one of them. A Grant County detective for years, she has her own reasons for being drawn to this case and a fierce drive to see justice done. For these three people, who have each seen the darkest side of human nature, the body of the murdered girl is but the first in a series of shocking and sordid revelations.

Now, as Jeffrey and Sara narrow the field of suspects, they must confront their own doubts and indiscretions, while Lena Adams sees herself reflected in the frightened eyes of a battered woman who may be the key figure in the case. As Faithless builds to a stunning and unforgettable climax, Karin Slaughter masterfully brings together strands of interlocking lives, family secrets, and hidden passions with one astounding truth: the identity of a killer who is more evil and dangerous than anyone could have guessed.