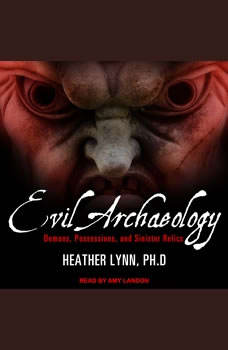 An investigation into the historical and archaeological evidence of demons, curses, and possession, featuring some of the most gruesome artifacts and sites ever discovered Demons, jinn, possession, sinister artifacts, and gruesome archaeological discoveries haunt this new book by Dr. Heather Lynn. Evil Archaeology investigates the archaeological record for artifacts and evidence of evil entities, revealing how demons from the ancient world may be dwelling among us. It also looks at the history and lore behind real relics believed to be haunted and includes historical accounts of demonic possession that go as far back as King Solomon invoking demons to help him build his famed temple. Is there really a prehistoric fertility goddess figure that has been known to bring death to the families of anyone who holds it? Are there real vampire graveyards? Can the archaeological record prove the existence of demons and malevolent entities? Some tantalizing questions Evil Archaeology addresses include: ● What is the origin of demons? ● What role did Sumerian demons play in the development of civilization? ● Are curses real? ● Can material objects contain evil? What about places? ● What can we do to protect ourselves, according to historical records? ● Was Jesus an exorcist?

Immortality of the Gods
by Nick Redfern

Each of us are alive for a very limited time. Or are we? What if we could live not just for a century, but for millennia? What if there were a way for us to never die? Is such a thing even remotely possible? It may not only be feasible; it may ver...

Make no mistake this book is not for everyone; it requires the reader to make a giant leap of faith and accept some very powerful, if unusual concepts. However, for those unique individuals who are really ready to receive the message, ‘The Sec...

Manifesting Magic is a seven-part course designed to positively reshape and realign the direction of your life. We started this journey, somewhat predictably with money and wealth attainment. Certainly not because the accumulation of money can ever ...

Graham Hancock's multi-million bestseller Fingerprints of the Gods remains an astonishing, deeply controversial, wide-ranging investigation of the mysteries of our past and the evidence for Earth's lost civilization. Twenty years on, Hancock returns...

The Power of Ho'oponopono: An Introduction to The Ancient Hawaiian Healing Ritual
by Craig Beck

Ho?oponopono (ho-o-pono-pono) is an ancient Hawaiian practice of reconciliation and forgiveness. Similar forgiveness practices were performed on islands throughout the South Pacific, including Samoa, Tahiti and New Zealand. Traditionally ho?oponopon...

The stunning continuation of an intensive study of UFO phenomena in which the hard science, technology, and the human mind are explored as they relate to our world and the encounters that people are still having today.

Don’t look upIt won’t help. You can’t get out of the way, you can’t dig a hole deep enough to hide. The end is coming, and there’s nothing you can do about it.So why read this book?Because you can’t look away when...

The Kybalion
by The Three Initiates

He was the father of the occult, the founder of astrology, the discoverer of alchemy. He was Hermes Trismegistus, and as the scribe of the gods of ancient Egypt, he possessed all divine knowledge... which he passed on to humanity, though only those ...

Technology of the Gods
by David Hatcher Childress

Popular Lost Cities author David Hatcher Childress takes us into the amazing world of ancient technology, from computers in antiquity to the flying machines of the gods. Childress looks at the technology that was allegedly used in Atlantis and the t...