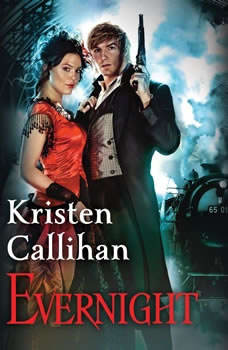 Once the night comes . . . Will Thorne is living a nightmare, his sanity slowly being drained away by a force he can't control. His talents have made him the perfect assassin for hire. But as he loses his grip on reality, there is no calming him-until he finds his next target: the mysterious Holly Evernight.Love must cast aside the shadowsHolly cannot fathom who would put a contract on her life, yet the moment she touches Will, the connection between them is elemental, undeniable-and she's the only one who can tame his bouts of madness. But other assassins are coming for Holly. Will must transform from killer to protector and find the man who wants Holly dead . . . or his only chance for redemption will be lost.

The Illustrious
by Pavel Kornev

In this world, science took the place of magic. Meanwhile, the transition from the era of steam to the epoch of Sublime Electricity is already underway. But magic hasn't simply disappeared without a trace. It still exists, concealed in the blood of ...

From New York Times bestselling author Gail Carriger comes the delightful sequel to Prudence. Rue and the crew of the Spotted Custard return from India with revelations that shake the foundations of England's scientific community. Queen Victoria i...

The Affinity Bridge
by George Mann

Welcome to the bizarre and dangerous world of Victorian London, a city teetering on the edge of revolution. Its people are ushering in a new era of technology, dazzled each day by unfamiliar inventions. Airships soar in the skies over the city, whil...

Cherie Priest's long-awaited steampunk debut, Boneshaker, opens in the early days of the Civil War when rumors of gold in the frozen Klondike brought hordes of newcomers to the Pacific Northwest. Anxious to compete, Russian prospectors commissioned ...

The Iron Duke
by Meljean Brook

First in an all-new series where seductive danger and steampunk adventure abound in the gritty world of the Iron Seas. After the Iron Duke freed England from Horde control, he instantly became a national hero. Now Rhys Trahaearn has built a merch...

A Gentleman of Means
by Shelley Adina

How much must one sacrifice for the sake of friendship?Lady Claire Trevelyan has had to deal with betrayal before, in small ways and large. But none is quite so painful as the belief that Gloria Meriwether-Astor had deserted her and her friends and ...

The Ripper Affair
by Lilith Saintcrow

The enthralling conclusion to the Bannon and Clare trilogy from New York Times bestselling author, Lilith Saintcrow. Sorcery. Treason. Madness. And, of course, murder most foul... A shattering accident places Archibald Clare, mentath in the service...

Alexia Maccon, the Lady Woolsey, awakens in the wee hours of the mid-afternoon to find her husband, who should be decently asleep like any normal werewolf, yelling at the top of his lungs. Then he disappears; leaving her to deal with a regiment of ...

The air pirate Andan Cly is going straight. Well, straighter. Although he's happy to run alcohol guns wherever the money's good, he doesn't think the world needs more sap, or its increasingly ugly side-effects. But becoming legit is easier said than...