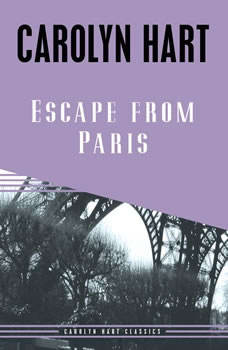 The year is 1940. As England braces for invasion and the German army overruns Europe, two American sisters in Paris risk their lives to save a downed British airman from Nazi arrest. Linda Rossiter and Eleanor Masson soon realize the price they may pay when they read this ominous public notice: 'All persons harbouring English soldiers must deliver same to the nearest Kommandantur not later than 20 October 1940. Those persons who continue to harbour Englishmen after this date without having notified the authorities will be shot.' On Christmas Eve, the Gestapo sets a trap, and death is only a step behind the two American women.

Carolyn Hart has been a favorite mystery author of mine for years. I love the Death on Demand series, enjoy the Henrie O series and the Ghost series. I was surprised to discover she also has a number of stand alone novels. Most of them were written in the 80s and 90s but some have been reissued like the book I just read ESCAPE FROM PARIS which was written in 1982. The story is familiar to readers who like historical novels especially set during WWII or those who have read nonfiction accounts such as AN AMERICAN HEROINE or THE HIDINGH PLACE and Ann Franks diary. The setting is German occupied Paris in the late 1930s and concern two sisters, both Americans living in the city while Eleanor awaits the news of her husband fighting in the war. Linda takes her sisters round at the hospital and gets involved with rescuing an English pilot and getting him and others out of the country to safety and back to England. The Gestapo are everywhere and even your neighbor can turn you in on suspicion of harboring an English soldier. The story is quite good for being a basically predictable tale. There is a lot of suspense and the reader becomes totally immersed in the mission and can feel the panic and despair and understand the hardships faced by the people of France. It is heartbreaking at times, frightening at times and full of anger at times. The only reason I didnt give it a 5 star rating is I felt it was a little too predictable and there were some strings dangling when I finished the book. This book is perfect for a young adult reader or anyone who has not read much about the topic and time period. I highly recommend AMERICAN GEROINE for those who might want a more realistic perspective. Her story is similar to Eleanors being American married to a Frenchman and helping in the Resistance movement. On a lighter note if you ever watch the British comedy Allo Allo you will not be able to read this book without thinking of this show and wonder if the English pilots might end up being disguised as onion sellers. : Ok I am a little wacky in my humor but I do love that show and it is good to laugh or I would just cry at the treatment of those poor people in France and throughout Europe and England.