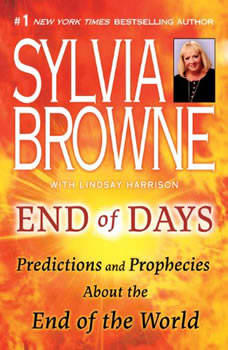 End of Days: Predictions and Prophecies About the End of the World

From her unique insider's perspective-as someone familiar with this world and the next-America's leading psychic tells us what to expect and how to prepare. Religious wars, global terrorism, genocide, ecological disaster: Today's world is a scary place. The Information Age has carried us into the Age of Anxiety, where everyone is on edge, wondering what is coming next. What will happen in 2012, when the Mayan calendar predicts the end of the world? What will the next fifty years bring? The next 100 years? If the world really is going to end, what then? If anyone knows, it is Sylvia Browne. A psychic since age three, when her powers were first revealed, she stays in close touch with her spirit guide, enabling her to answer our most pressing questions about today, tomorrow . . . and the end of days.

From the internationally best selling author of Red Herrings and White Elephants, Pop Goes the Weasel, New World Order and many more;Albert Jack's Mysterious World Part One is a collection of the world's most famous and puzzling mysteries.What reall...

End of Days
by Sylvia Browne

From her unique insider's perspective-as someone familiar with this world and the next-America's leading psychic tells us what to expect and how to prepare. Religious wars, global terrorism, genocide, ecological disaster: Today's world is a scary p...

From the Author of the Internationally Bestselling Books - Red Herrings & White Elephants, What Caesar did for My Salad, Shaggy Dogs, Pop Goes the Weasel, They Laughed at Galileo:We all love a good mystery don’t we? And by all, I mean each and...

The Synchronicity Key
by David Wilcock

The Source Field Investigations was a New York Times, Wall Street Journal, and USA Today bestseller that uncovered hidden science and lost prophecies to illuminate an entirely new understanding of our world today. In his new audiobook, The Synchroni...

“I have known Sylvia for twenty years, and I have the greatest respect for her. People seek her out for her much celebrated intuitive skills, however, I have sought her out for her friendship and kindness. I applaud her for the peace and sola...

In Prophecy, Sylvia Browne turns her psychic wisdom to the puzzling, often contradictory predictions proposed by major historical and contemporary figures, ranging from biblical prophets and Nostradamus to George Washington and NASA scientists.

Prophecy: A History and How to Guide
by Martin K. Ettington

The ability to tell the future has always fascinated man since prehistoric times. Prophets have spawned numerous religions and methods of divination to tell the future. Prophets are not only able to predict some major events seems but may be able to...

The Alchemy of Nine Dimensions
by Barbara Hand Clow

From the author of the bestselling The Mayan Code and The Pleiadian Agenda comes a newly revised and expanded edition of The Alchemy of Nine Dimensions, with important new insights into time acceleration, the Mayan calendar, and 2012.For over two de...