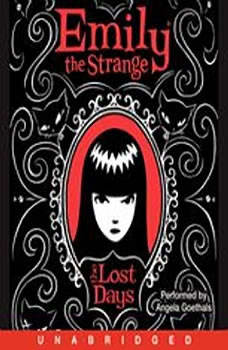 Emily the Strange: The Lost Days

13 Elements you will find in the first Emily the Strange novel: 1. Mystery 2. A beautiful golem 3. Souped-up slingshots 4. Four black cats 5. Amnesia 6. Calamity Poker 7. Angry ponies 8. A shady truant officer 9. Top-13 lists 10. A sandstorm generator 11. Doppelgängers 12. A secret mission 13. Earwigs Emily the Strange: 13 years old. Able to leap tall buildings, probably, if she felt like it. More likely to be napping with her four black cats; or cobbling together a particle accelerator out of lint, lentils, and safety pins; or rocking out on drums/ guitar/saxophone/zither; or painting a swirling feral sewer mural; or forcing someone to say "swirling feral sewer mural" 13 times fast . . . and pointing and laughing.