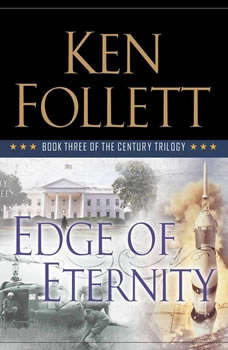 Edge of Eternity: Book Three of The Century Trilogy

Throughout the trilogy, Follett has followed the fortunes of five families--American, German, Russian, English, and Welsh--as they make their way through the twentieth century. Now, they come to one of the most tumultuous eras of all: the enormous social, political, and economic turmoil of the 1960s - 1980s, from civil rights, assassinations, mass political movements and Vietnam to the Berlin Wall, the Cuban Missile Crisis, presidential impeachment, revolution--and rock and roll.

East German teacher Rebecca Hoffman discovers she's been spied on by the Stasi for years and commits an impulsive act...George Jakes, the child of a mixed-race couple, bypasses a corporate law career to join Robert F. Kennedy's Justice Department, and finds himself in the middle of the seminal events of the civil rights battle...Cameron Dewar, the grandson of a senator, jumps at the chance to do some official and unofficial espionage for a cause he believes in...Dimka Dvorkin, a young aide to Nikita Khrushchev, becomes a prime agent both for good and for ill as the United States and the Soviet Union race to the brink of nuclear war, while his twin sister, Tania, carves out a role that will take her from Moscow to Cuba to Prague to Warsaw--and into history.

As always, the historical background is brilliantly researched, the action fast-moving, and the characters rich in nuance and emotion. With the hand of a master, Follett brings us into a world we thought we knew but will never seem the same again.

Edge of Eternity: Book Three of The...
The Century Trilogy