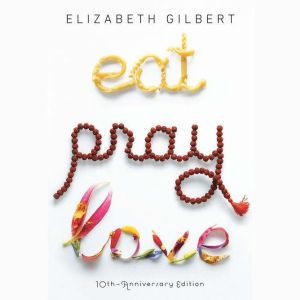 Eat, Pray, Love: One Woman's Search for Everything Across Italy, India and Indonesia

A transformational journey through Italy, India, and Bali searching for pleasure and devotion—the massive bestseller from the author of The Signature of All Things

This beautifully written, heartfelt memoir touched a nerve among both readers and reviewers. Elizabeth Gilbert tells how she made the difficult choice to leave behind all the trappings of modern American success (marriage, house in the country, career) and find, instead, what she truly wanted from life. Setting out for a year to study three different aspects of her nature amid three different cultures, Gilbert explored the art of pleasure in Italy and the art of devotion in India, and then a balance between the two on the Indonesian island of Bali. By turns rapturous and rueful, this wise and funny author (whom Booklist calls “Anne Lamott’s hip, yoga- practicing, footloose younger sister”) is poised to garner yet more adoring fans.

book club book! a woman gets divorced, breaks down, leaves her life for a year to travel to italy, india and bali. mostly everyone in the club loved it, said it changed their lives, rave rave. it was boring. bad writing style. too preachy and self promoting. the italy section grossed me out by her excess in food. i could never relate to this woman, i wouldn't get along with her at all. this is a memoir, true story.

The writing style isn't very refined however, you get the sense that you are personally speaking to the author and in a conversation with her, which is quite enjoyable given the subjects she discusses - subjects which are very personal and thoughts that many women have had in my opinion. I like the structure of the book and how it is written in the structure of prayer beads. I also like her personification of things such as Depression and Loneliness, and find her way of weaving her experiences with her opinions very interesting. It is definitely worth a read.

I couldn't read this book long enough to get out of Italy! I kept waiting for something or anything interesting to happen. This was one of the few books I couldn't force myself to finish and would not recommend it to anyone.