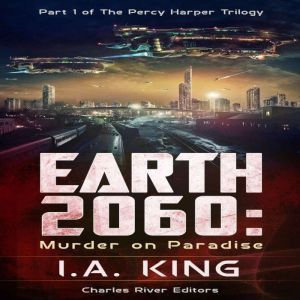 Earth 2060: Murder on Paradise (Part 1 of The Percy Harper Trilogy)

In the year 2060, Earth is divided into 10 sectors. AI has made many jobs obsolete, people are having difficulties finding meaning in life, and many are taking legalized drugs or living in a massive virtual simulation called The World (TW). Humans have also colonized Mars and are beginning to set up on Europa and Callisto, two of Jupiter's moons. The colony on Mars is quite active but primarily a place for hedonism - drinking, drugs, sex, and gambling, are the tamer of the pursuits there.

Back on Earth, there are still vast inequities, even though most people receive income grants. There are some very wealthy people that, though it is denied, control most of the economy and government. Corruption is rife, but to keep control over people, that corruption is deftly hidden.

Percy Harper lives in the city of Victoria in Sector 10, an old school homicide detective who doesn't trust AI, though he has an AI partner called Albert (Albert can be found in Percy's swatch, and when Percy calls him IA, short for "Intelligent Asshole," Albert merely finds it amusing). Despite his controversial ways, Percy is grudgingly seen as the best detective in Sector 10, even as he avoids relying on modern methods. He has a very strong sense of justice and believes that justice is not always consistent with the law.

In Murder on Paradise, the first part of the Percy Harper Trilogy, a CEO of a personalized drug company, My Experience, is found dead at home in his bed. At first Percy thinks it was some kinky drug fueled sexual game gone wrong, and with the security cameras off, there is no AI to help them. But then irregularities appear in the CEO's business, and Percy begins to question the CEO's messy divorce with his ex-wife Emma, who remains bitter and is now a reckless drug addict. Could she have done it? Percy also begins to suspect Verda Quince, a self-made billionaire with a personal history that nobody is sure about.