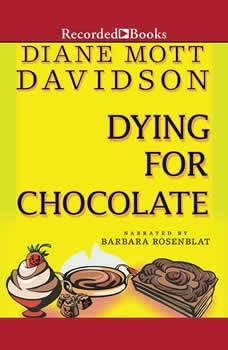 Best-selling author Diane Mott Davidson changed the mystery novel forever with her culinary crime series. Filled with heart-stopping suspense, garnished with mouth-watering gourmet dishes, and sprinkled with wry humor, these delicious cases have captivated readers from coast to coast. In Dying for Chocolate, intrepid caterer Goldy Bear has moved to the posh Aspen Meadows Country Club, where her tasty concoctions are a hit with the wealthy residents. But when her boyfriend, a local analyst, perishes in a car accident, Goldy suspects that his death has all the ingredients of a homicide. If you have an appetite for murder as the main course, you will relish every word of Goldy's perilous adventure. Veteran narrator Barbara Rosenblat brilliantly conveys all the intelligence, wit and energy of this irrepressible mistress of menus.

Murder with Puffins
by Donna Andrews

Meg Langslow and her boyfriend, Michael, are searching for some romantic alone time. She knows the perfect place for a private getaway: her aunt's cottage on the tiny island of Monhegan. But when a series of events leads to the couple being trapped ...