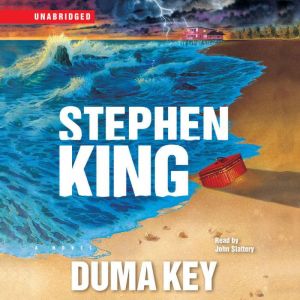 NO MORE THAN A DARK PENCIL LINE ON A BLANK PAGE. A HORIZON LINE, MAYBE. BUT ALSO A SLOT FOR BLACKNESS TO POUR THROUGH... A terrible accident takes Edgar Freemantle's right arm and scrambles his memory and his mind, leaving him with little but rage as he begins the ordeal of rehabilitation. When his marriage suddenly ends, Edgar begins to wish he hadn't survived his injuries. He wants out. His psychologist suggests a new life distant from the Twin Cities, along with something else: "Edgar, does anything make you happy?" "I used to sketch." "Take it up again. You need hedges...hedges against the night." Edgar leaves for Duma Key, an eerily undeveloped splinter of the Florida coast. The sun setting into the Gulf of Mexico calls out to him, and Edgar draws. Once he meets Elizabeth Eastlake, a sick old woman with roots tangled deep in Duma Key, Edgar begins to paint, sometimes feverishly; many of his paintings have a power that cannot be controlled. When Elizabeth's past unfolds and the ghosts of her childhood begin to appear, the damage of which they are capable is truly devastating. The tenacity of love, the perils of creativity, the mysteries of memory and the nature of the supernatural -- Stephen King gives us a novel as fascinating as it is gripping and terrifying.

what happened to Steven King. I couldn't wait for this boring audio book to end. It took forever, rolling my eyes and shaking my head. One of the most monotone, drawn out, "when is it going to end" books I ever read. I am done with one of my previous favorite authors.

I've long been a fan of Stephen King, but some of his more recent novels have not been as enjoyable to me as his older stuff. The Stand has always stood out as a clear favorite. Until now. Now I'd have to say that Duma Key is very close to being on par with that classic. The characters are wonderfully drawn, the location is outstanding, the suspense keeps you guessing what is going on, and you never know what's going to happen next. I just loved this book. And even moreso listening to it being read, as it built its magic around me. A must listen.

I usually only listen to audio books during my comute to and from work - about an hour. I started out that way with Duma Key, but fininsed it up in my bedroom - listening to one disc after the other until it was through. I thought the book was extaordinaily well written and spellbinding. The narrator did an excellent job as well.

This is the best writing that I've read or listened to from King. Especially the first 3/4 of the book. I would have given this 5 stars had it not been for an ending that doesn't do the rest of the book any justice. This is also one of those cases where I'm glad that I listened to the book rather than read it because the narrator does such a fantastic job. I just don't think that the unique dialog would have come across as well from reading it. Very cool book.

If you like Stephen King, then this is a must read. It has all his usual wordiness, without quite as much gory stuff. You can see the influence of HIS severe injuries and his recoveries in the way he pours himself into this book. The rehabilitation of the main character seems so real-it must have been similiar to his own. I love the setting of the fantasy Florida Key he must have spent some time there in the Keys to make his descriptions so vivid. However, give yourself plenty of time to read this, it is a really thick book. He can really take you into his world.