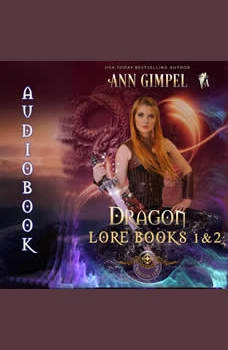 A wee bit of mist, a splash of magic, heart bending romance, and DRAGONS!

Bundled together for the first time! Grab the first two Dragon Lore audiobooks at an extremely attractive price

Furious and weary, Angus Shea wants out, but he can’t stop the magic powering his visions. The Celts kidnapped him when he wasn’t much more than a boy. He’s sick of them and their endless assignments, but they erased his memories, and he has no idea where he came from.

Arianrhod prefers to work alone and guards her privacy for the best of reasons. She’s not exactly a virgin, and she’d be laughed out of the Pantheon if the truth surfaced. Despite the complications of leading a double life, she’s never found a lover who tempted her to walk away from the Celtic gods.

Dragon shifters are disappearing from the Scottish Highlands. The Celtic Council sends Angus and Arianrhod to Fire Mountain, the dragons’ home world. Attraction ignites, so urgent Arianrhod’s carefully balanced life teeters on the brink of discovery.

To Love a Highland Dragon

A dragon shifter stirs and wakens deep in the Scottish Highlands. His cave is the same and his hoard intact, yet something’s badly amiss. Lachlan ventures above ground—and wishes he hadn’t. His castle is gone, replaced by ungainly row houses. Men aren’t wearing plaids, and women scarcely wear anything at all.

In Inverness for a year on a psychiatry fellowship, Dr. Maggie Hibbins watches an oddly dressed man pick his way out of a thicket. He looks so lost—and so unbelievably, knock-out gorgeous—she takes a chance and stands him a meal. The hard-to-accept truth bashes gaping holes in her equilibrium. He looks odd, sounds odd, acts odd because he’s a refugee from another era. Born of powerful witches, Maggie runs headlong into the myth and magic that are her birthright.