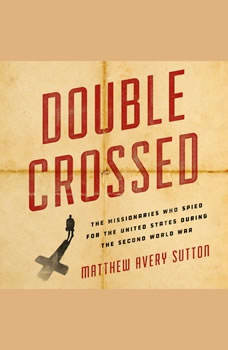 Double Crossed: The Missionaries Who Spied for the United States During the Second World War

The untold story of the Christian missionaries who played a crucial role in the allied victory in World War II What makes a good missionary makes a good spy. Or so thought "Wild" Bill Donovan when he secretly recruited a team of religious activists for the Office of Strategic Services. They entered into a world of lies, deception, and murder, confident that their nefarious deeds would eventually help them expand the kingdom of God.In Double Crossed, historian Matthew Avery Sutton tells the extraordinary story of the entwined roles of spy-craft and faith in a world at war. Missionaries, priests, and rabbis, acutely aware of how their actions seemingly conflicted with their spiritual calling, carried out covert operations, bombings, and assassinations within the centers of global religious power, including Mecca, the Vatican, and Palestine. Working for eternal rewards rather than temporal spoils, these loyal secret soldiers proved willing to sacrifice and even to die for Franklin Roosevelt's crusade for global freedom of religion. Chosen for their intelligence, powers of persuasion, and ability to seamlessly blend into different environments, Donovan's recruits included people like John Birch, who led guerilla attacks against the Japanese, William Eddy, who laid the groundwork for the Allied invasion of North Africa, and Stewart Herman, who dropped lone-wolf agents into Nazi Germany. After securing victory, those who survived helped establish the CIA, ensuring that religion continued to influence American foreign policy. Surprising and absorbing at every turn, Double Crossed is the untold story of World War II espionage and a profound account of the compromises and doubts that war forces on those who wage it.