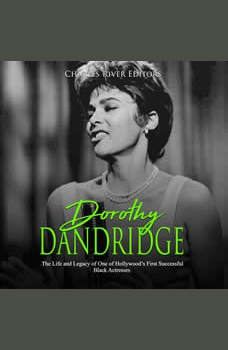 Dorothy Dandridge: The Life and Legacy of One of Hollywood's First Successful Black Actresses

“If I were white, I could capture the world.” – Dorothy Dandridge

The bright summer sun shined blissfully on a secluded valley tucked into the romantic Costa del Sol in southern Spain. Water bubbled friskily over a rocky streambed as trees swayed in the gentle tropical breeze and dappled the banks in playful shadows. A closer look reveals a man and a woman entwined on the rocky shore in an intimate embrace. The man trembles with longing as he bends over the woman, his parted lips just inches from hers. She eagerly folds her arms around him, her fingertips passionately digging into the skin on his back as she draws him closer.

The man was white. The woman was black, and in Hollywood in 1959, that was still taboo.

The steamy scene was being shot for the film Malaga, and the actress in the scene, Dorothy Dandridge, had just shared Hollywood’s controversial first interracial kiss on screen a year earlier. Despite this distinction and other more notable accomplishments, many people today are not familiar with the groundbreaking actress, even as she was among the most charismatic and beautiful actresses of the era. Her alluring nightclub acts set pulses pounding across the globe, and she was Hollywood’s first black leading actress.

Sadly, all of it came at a high price. Dorothy bore the scars of a tormented childhood, endured the fallout from multiple failed relationships, suffered professional and financial setbacks, and battled ongoing alcohol and prescription drug abuse. Throughout all that, racism was the most tenacious demon she had to fight, because Dorothy came of age in an era when society and the entertainment world largely held to demeaning racial stereotypes.