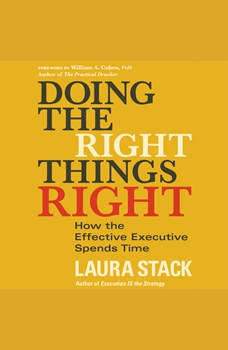 A How-To Guide for the Modern LeaderInspired by Peter Drucker's groundbreaking book The Effective Executive, Laura Stack details precisely how 21st-century leaders and managers can obtain profitable, productive results by managing the intersection of two critical values: effectiveness and efficiency.Effectiveness, Stack says, is identifying and achieving the best objectives for your organization—doing the right things. Efficiency is accomplishing them with the least amount of time, effort, and cost—doing things right. If you're not clear on both, you're wasting your time. As Drucker put it, “There is nothing so useless as doing efficiently that which should not be done at all.” Stack's 3T Leadership offers twelve practices that will enable executives to be effective and efficient, grouped into three areas where leaders spend their time: Strategic Thinking, Teamwork, and Tactics. With her expert advice, you'll get scores of new ideas on how you, your team, and your organization can boost productivity.

The 60 Second Procrastinator
by Jeff Davidson

The author of two intelligent guides on stress and time management, Davidson offers down-to-earth lessons on how to get the important things done. Though his conversational charm makes him come across like your best friend talking over lunch, the au...

Quiet Impact: A Creative Introvert's Guide to the Art of Getting Noticed
by Drew Kimble

<h3>Are you an introvert trying to get noticed in a world full of noise? Learn how to take charge of your strengths and use them to your creative advantage. </h3><p>Do you worry that being an introvert will hold you back in your cr...

"Less is more"-or, more specifically, the less you have to do, the more life you have to live. Efficiency expert Ari Meisel details his "Less Doing" philosophy, which will streamline your life, and make everything easier. In business and our perso...

Words That Work
by Frank I. Luntz

The nation's premier communications expert shares his wisdom on how the words we choose can change the course of business, of politics, and of life in this country In Words That Work, Luntz offers a behind-the-scenes look at how the tactical use of...

Become a Master of Business Seduction in just 30 Days In business, you need an edge. In every business situation-to get that job, get that promotion, lead that negotiation, make that sale-you need to win people over. In highly competitive situation...

The Power of Body Language
by Tonya Reiman

The Power of Body Language is your practical, personal playbook for getting what you desire from others-and zoning in on what others are saying to you without words. In an insightful and engaging narrative peppered with fascinating facts, nationall...

A new edition of Devora Zack's classic bestseller (over 120,000 sold in 15 languages) on networking techniques that leverage the strengths of the mingling-averse, updated throughout, with two new chapters. Would you rather get a root canal than fac...

How to Be Better at Almost Everything
by Pat Flynn

It's one of the biggest lies you've probably heard your entire life: Mastering one specific skill set is the key to success. That may have been true 20 years ago, but in today's global economy, being the best at a single thing just doesn't cut it an...

Draw Them In, Don't Drive Them Away!People often get promoted to leadership positions without knowing how to communicate an inspiring strategic vision to the people who report to them. So they focus on what they know: tactics, not strategy. As a res...