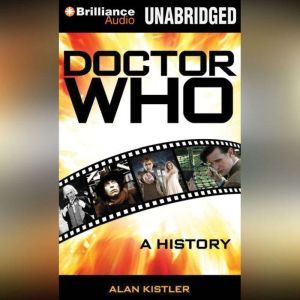 Doctor Who: A History

Published to coincide with the 50th anniversary, an in-depth look at the world’s longest running and most successful science fiction show“The world would be a poorer place without Doctor Who.” —Steven SpielbergPremiering the day after the JFK assassination, Doctor Who humbly launched one of the entertainment world’s first super-brands. We begin with a look at TV programming of the day and the original pitch documents before delving into the Daleks, which almost didn’t make the cut but inspired many monsters to follow. After three years, First Doctor William Hartnell left, prompting the BBC to recast their hit rather than end it, giving us the first “regeneration” and making TV history. We follow the succession of Doctors—including Third Doctor Jon Pertwee, exiled to Earth and targeted by the Master—and see how the program reflected the feminism of the 1970s while gaining mainstream popularity with Fourth Doctor Tom Baker…until declining support from the BBC eventually led to cancelation. Fan outcry saved the series, only for it to suffer a repeat cancelation. Yet many continued to enjoy the Whoniverse in syndication, novels, audio dramas, and Doctor Who Magazine. Paul McGann impressed many as the Eighth Doctor in a 1996 TV movie, but it failed to reignite the series.A new age dawned in 2005 with Ninth Doctor Christopher Eccleston and a serious special effects budget before Tenth Doctor David Tennant helped rocket the series to international popularity and a new era of spinoffs. With Eleventh Doctor Matt Smith, the show became a bona fide success in America. For the program’s fiftieth anniversary, Peter Capaldi became the Twelfth Doctor, ushering in yet another era for our unstoppable Time Lord.Featuring discussions of concepts and characters, with insights from producers, writers, and actors from across the years, here is a rich, behind-the-camera investigation into the dazzling multiverse of Doctor Who.