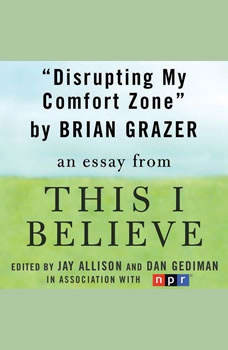 Disrupting My Comfort Zone: A "This I Believe" Essay

Oscar Award-winning producer Brian Grazer (A Beautiful Mind, Apollo 13) talks about "Disrupting My Comfort Zone" in both his professional and personal life in his contribution to NPR's This I Believe series.

Disrupting My Comfort Zone: A "This...
This I Believe