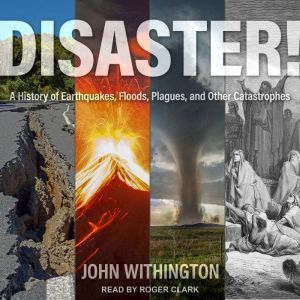 Disaster!: A History of Earthquakes, Floods, Plagues, and Other Catastrophes

A comprehensive catalog of the most devastating and deadly events—natural or man-made—in human history. If you follow the news it can seem like injury, sickness, and death are now constant, inescapable occurrences that threaten us every second of every day. But such catastrophic events—as terrible and frightening as they are—have been happening for as long as mankind has walked the Earth . . . and even before. From ancient volcanoes and floods to epidemics of cholera and smallpox to Hitler's and Stalin's mass killings in the twentieth century, humanity's continued existence has always seemed perilous. This volume offers a unique perspective on our modern fears by revealing how dangerous our world has always been—with examples such as: the Black Death that killed over seventy-five million people in the 1300s; the 1883 volcanic eruption on Krakatoa; the Irish Potato Famine; the 1970 cyclone in Bangladesh; and the long-ago volcano in Sumatra that may have wiped out as much as 99% of the world population. With this catalog of calamity, listeners will be engrossed, enlightened, and relieved to realize that despite all the disasters that have befallen humanity, we are still here.