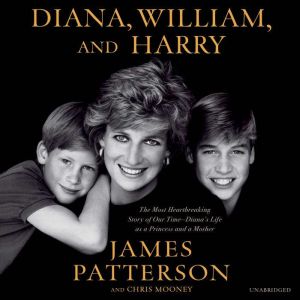 James Patterson tells the most heartbreaking story of our time, as only he can—Diana’s life as a princess and a mother taken too soon from her sons, William and Harry—timed to the twenty-fifth anniversary of her death.

From the moments William and Harry are born into the House of Windsor, they become their young mother’s whole world.

I’ve got two very healthy, strong boys. I realize how incredibly lucky I am, Diana reminds herself every morning. But even the Princess of Wales questions, Am I a good mother?

Diana’s faced with a seemingly impossible challenge: one son destined to be King of England and another determined to find his own way.  She teaches them to honor royal tradition, even while daring to break it.

“Sometimes I’d like a time machine…” Diana says as William and Harry grow up, never imagining they’d have less than a lifetime together. Even after she’s gone, her sons follow their mother’s lead—and her heart. As the years pass and William and Harry grow into adulthood and form families of their own, they carry on Diana’s name, her likeness, and her incomparable spirit.

“James Patterson applies his writerly skills to real-life history with novelistic style” (People) in this deeply personal and revealing biography of the world’s most storied family, from the world’s #1 bestselling author.